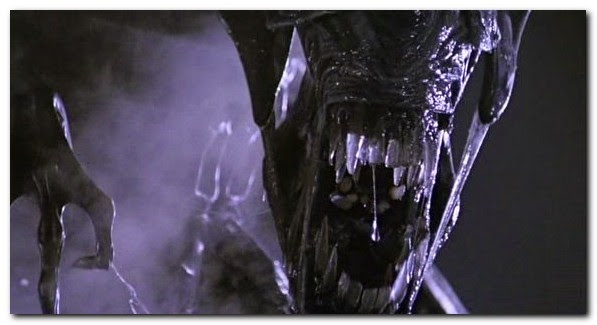 So I mentioned the other night that we ran through a game of Zombie Cinema, but this time we turned the genre slightly on its head and played it as "Aliens Cinema" straight from James Cameron's awesome sequel movie. I break down what we did during the game which differs from previous games, and, through a discussion of our gaming group on another forum, I'll add in some of Andy's comments (italicized) as well.

The game was a blast, and played incredibly smooth on the zombie board. Andy and Chri3 played Colonial Marines sent to investigate LV-531, a terraforming colony. I played a little kid who, along with her cronies, accidentally sets the alien menace in motion. Although it wasn't a mirror image of the movie, it was close, there were many similarities and all of us being so familiar with the setting helped in keeping the game rolling.

It went really well and had some key differences, but afterward, we all commented on how similar it was to Aliens. I think this was due to two things. Most zombie games were pretty similar in plot generalities, too, but not in specifics as they are broken up by the variety of settings. And we did not have a variety of settings because we were working from a single film, not a field or genre. We could have mixed it up had we tried to be a little more creative and break from the small amount of canon we were using (hiding in a hydroponics bay, a Weyland-Yutani scientific experiment pod with alien hybrids and/or new equipment, pets or wild animals, etc...) instead of setting it on a renamed Aliens terraforming colony, with colonial marines and a kid, with a [Weyland-Yutani] slimeball trying to get the aliens, JUST LIKE ALIENS. I don't see it as a product of the system, just our choices.

We used a couple of small, but key, rules changes. First off, conflicts did not have to be between player characters. But, if I initiated a conflict between an NPC I run and one of the other players at the table, I win (or lose) on the board as if my own character was involved directly. This element seems simple enough and it really added to the action.

That did work well.

The other thing wasn't a house rule, but a rule we haven't used really. When narrating a scene, you don't *have* to have a conflict. When it's a players turn, they narrate the scene, and if nothing happens conflict-wise, you just move on to the next player. This helped really flesh out the cinematic feel of the game and further set the tone. Also, turns went a lot faster since there
weren't conflicts all the time, which of course also advanced the "zombie" counter faster too, always a good thing to help pace the pending doom.

One source of confusion we had during [the last] game was what to do if there is conflict, but one party backs down. I believe that is covered indirectly in the rules-- if there is no conflict, the active player narrates the scene unless a narrator has been established. I think I even commented on how I didn't know how you could establish a narrator if there was no conflict, but that sentence makes sense if you consider somebody backing down to be equivalent to not having a conflict. The person who 'won" the non-conflict is the narrator.

We had played a prior game with our buddy Rucht over the weekend of the standard zombie variety and it was first game. No stranger to RPG's, he loved it and immediately saw the possibilities for different genres and settings. I'm not the biggest WWII fan out there, but for gaming it has seen a huge surge in popularity over the years. Rucht's variant idea was to base the game on the German invasion of France, which, given the mechanics, would work well. As long as you've got the players all on board with the concept, and ready to mix it up with their roleplaying creativity, pretty much anything could go.
Posted by MIK at 10:43 AM