This week we got in our first game with Strange Aeons, the new indie skirmish game set in a pulp 1920's Cthulhu-mythos setting. I've seen this one before and it's very appealing to me in all aspects, plus there's a free demo ruleset out there too. Fortunately, Chrispy has a pension for new rules and trying out a wide variety of games, and like the Fear and Faith game we had a blast playing, he came ready once again with minis and rules at the ready. The rules themselves are straight forward and honestly, nothing too entirely special. The mechanics are solid and intuitive and I found no fault with them really, but at the same time they don't exactly blow you away or anything either. These are just the gameplay mechanics mind you, whereas the rulebook really shines is in the campaign structure and narrative scenarios. A lot of thought is put into linked 'mini-campaigns' that can be played in one day, and the rules used to handle what goes on in between games is detailed and let's you build a band of heroes or villains that have depth and you can keep alive, adding new skills and strengths while they gain experience.

There are basically two factions, the Threshold Agents who are the good guys; two-fisted action heroes and academics who fight the unseen forces of Eldritch Horror. For the most part they are basic, albeit above average, humans that can at later times gain extraordinary skills and even arcane powers. The forces of darkness (I forget what they're called) comprise the cultists, their coven leaders, and creatures benign, obscure, and terrible (werewolves, Godlings, winged terrors, even Yeti and the like). Everything is built on a points system and you have different levels of heroes and villains with varying costs, plus the cost of their weapons and equipment.

The inhuman adversaries can be pretty powerful too, in the game we played my band of heroes, four in all with weapons, equaled 15 points total. On the villains side, a single winged Night Gaunt was 15 points by itself. There's plenty of skills, both martial and arcane, for both sides; for instance the coven leader on the bad guy side in our game had spells at his disposal. 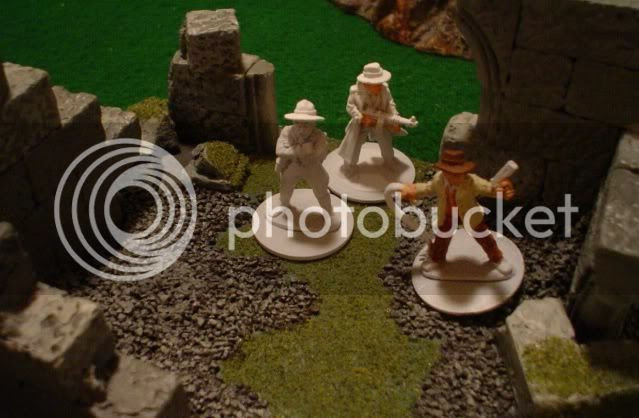 Barracus and his comrades claw through to the surface amidst ruins The Cult of the Swollen Goat led by a Magus, with a Night Gaunt ally The Swollen Goat advances across the board

Gameplay takes place in turn activated rounds. Each side has a leader or commander that has the ability to activate other models. On a leader's turn, they can activate two other models that same turn to act. All activated models get two actions (move, shoot, charge, etc.) and you can double up on actions if you like, such as moving or shooting twice. There will be times where you have more figures than you can activate, when you run out of activations, play goes to the next player. When they are done, if you have any figures that have yet to act this turn, they get to go. Play alternates in this manner until all models on both sides have had an activation. Once the round is over, a new one begins. There is also a command distance for leaders, and if models are outside this distance, they aren't able to become activated by the leader. Boom! Murph lights up a couple of cultist thugs with dynamite

I was a little disappointed in the weapon selection in the rulebook. The model in the pic above is armed with a BAR, but there weren't any stats for one, or even something close. Handguns were either heavy (1911's, .44 revolvers, etc.) or light (.22's, .25's, etc.) but there weren't stats for individual ones, Mauser stats would've been nice.

They did have some pulp staples like Thompsons and what not. The melee weapons seemed a little more varied, but apparently for the points, the meat cleaver is your best bet. It's probably best just to call this one any short bladed weapon however so you don't have a band full of butcher shop employees running around fighting evil. 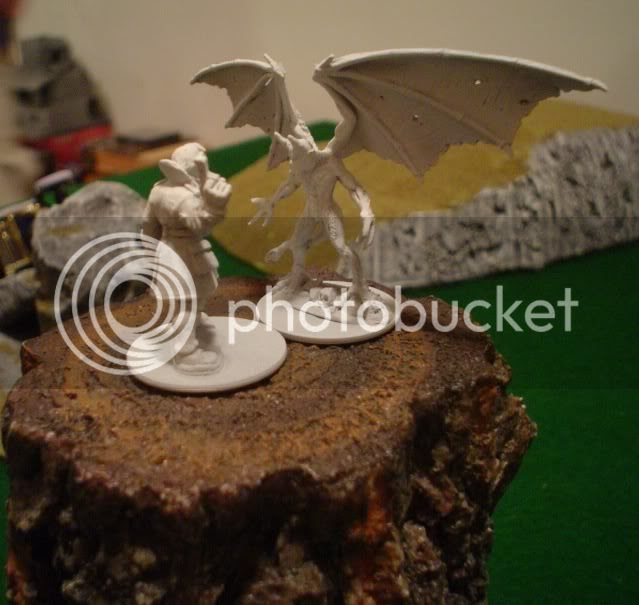 Ace McCoy takes on the Night Gaunt, and loses...

The core mechanics are flexible enough to allow for some cinematic heroics and other tabletop shenanigans, which is a big plus for me. In the case above my character scaled a tree and charged into melee with the Night Gaunt, this melee was most unadvised since the human was incredibly outmatched in terms of both strength and ferocity. 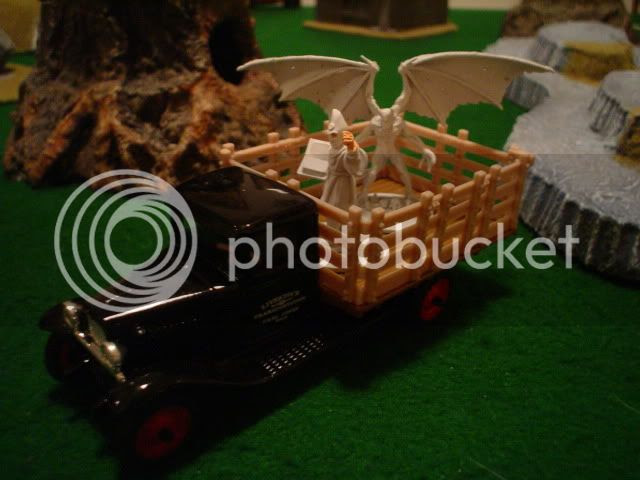 Taking a stroll down Victory Lane

Jake and I lost sight of our objective, get off the board, and instead met our demise trying to destroy the cultists to a man. We were understandably confident, we had wiped out all of the basic cultists and only two models remained of the enemy. Unfortunately, those two models were the coven leader magus and the Night Gaunt, the two most powerful models on the table. Every time the magus would fail a spell check he would roll on the madness table, every time he did this he would inexplicably get the 'frenzy' side effect which made him incredibly good in melee. I think Chri3 was frustrated he couldn't make his spell checks, but you certainly can't complain with your magus becoming a melee master!

It was a loss for the Threshold Agents, we weren't able to make it off the board and to our freedom. One of my models, second-in-command Sheila Ripcord, took a grievous wound and on the 'post battle' chart she shuffled her mortal coil. All three of my other characters took minor wounds, which all came up being a non-issue after the game. Nobody was able to gain any skills however, and now I have to replace my dead lieutenant. Jake also lost a character, although it was his leader unfortunately. On the enemy's side, the cultists were all dead, but that didn't matter because they were only of 'minion' level anyway, not able to gain new skills. The two that did survive however are just going to be more powerful next time.

In the post-game there are some more cool things your band can do. One of these is search the battlefield for 'map pieces' and artifacts. These pieces, if found (which isn't always guaranteed) can unlock new options for your band and their linked games. One of these options is opening up side quests that you can play out for the heroes that give significant rewards if you're successful. Another option they can unlock is allowing you to buy named and special characters from the Threshold Agents list. These characters, such as martial arts experts, sharpshooters, and the like can only be purchased with points earned through map pieces and side quests.

My overall impressions of the game are quite favorable. It's skirmish level, so you don't need a lot of figures, plus it's pulp on top of that, so you get a really cool selection of figs on the market to pick from. The forces are diametrically opposed, so your good guys look like good guys, and your bad guys definitely look like bad guys. Take all of this goodness and roll it up in a fresh tortilla of Cthulhu-mythos, cover it with mini-campaign secret sauce, and you've got Strange Aeons. It'll satisfy your pulp skirmish itch, and crank it up many more notches by mixing it up with some very well thought out and characterful Eldritch Horror.
Posted by MIK at 12:30 PM