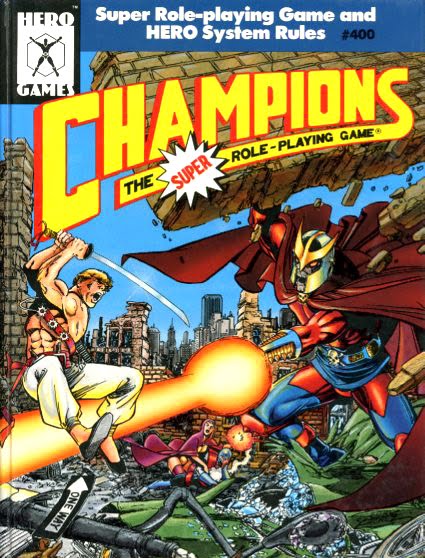 Starting off with number ten does leave a lot of questions unanswered as to what came before, but suffice it to say the other nine spots before this one helped only to make this one that much better.

It was 1990, I was sixteen and had a car, and a bunch of gaming under my belt. I was also big into comic books, so when a superhero rpg came out, I had to sign up. This was also the first time I remember having to actually work for the money to buy the hardback rulebook, which was kind of expensive at the time!

So I was mobile, driving myself to comic shops and games of Champions at other friends' houses, it was a good time indeed. I remember a lot of these games mainly due to the characters we painstakingly crafted but also the epic four hour battles against equally cool villains.

After 1990, and this foray into Champions, everything else gaming in my life just kind of exponentially grew. There's a reason I stuck with the first ten for this list, because the next twenty plus games could go on and on for quite a while!

I've got a lot of honorable mentions along the way, cool games that might've been one-shots or short-lived. The ten I picked out for this list however are the milestones themselves. So with Champions in the number ten spot we kick off the first ten gaming moments that have defined who I am, as a gamer, today. Enjoy!
Posted by MIK at 1:29 PM